News from the Winterton-on-Sea Parish Council & the village, July 2020

PARKING CHAOS: Norfolk Police are being asked to impose temporary measures to ease visitor traffic congestion in the village after emergency services trying to reach people in difficulty in the sea were held up by parked cars.

Brancaster, which saw an unprecedented number of daytrippers on Friday.

Now he has asked local officers for similar help in Winterton. “Can we please explore this

short term solution for my residents at Winterton please,” he said.

“Yesterday was absolutely abysmal for the residents due to the high numbers of tourists.

issue, but if it’s applied in Brancaster why not here please?”

get through. By then the six people in the water had managed to get to shore.

The same day bus company First tweeted: “Due to high number of parked cars along

Winterton we will not be able to serve Winmer Avenue until further notice.”

on a traffic policy for the whole village. It has already discussed the possibility of a one-way

Double yellow lines were put down in Beach Road as a result of chaotic parking by visitors, especially over Christmas and the seal pupping season. As a result motorists have sought out other areas of the village.

At Wednesday’s meeting on Zoom one parishioner told them the bin lorry had been unable to get through at one point and a bus driver was seen attempting to do a three-point turn in Winmer Avenue because the way was blocked by parked cars.

Deputy chairman Nigel Coe said: “Whenever you get a nice day it is a real issue. The village is a lovely place to visit and we’re not geared up.”

John Smithson suggested a consultation day with a gazebo set up on the green. Emma Punchard believed there should be an online survey and expressed concern that the council should not promise something it couldn’t deliver.

Cllr Coe said if the council was going to do a consultation it needed to gather as much information as possible.

County Councillor Ron Hanton agreed to send the council information on restrictions and the traffic management plan for Norfolk to use as guidance and the councillors agreed to start a consultation.

The council is also asking people to send it photographic evidence of poor parking via wintertoncarparking@gmail.com

COVID SAFETY AT VILLAGE HALL: Measures are being drawn up to make sure users are kept safe when the village hall is back in action.

Clerk Stacey Kent told the parish council a risk assessment was being done and there was a lot of work ahead in terms of the cleaning regime. “We will be updating our hire agreements and procedures over the next couple of weeks.”

had been set for the reopening. “I know that hirers are keen to come back,”

The existing agreement made clear there was an expectation that whoever

uses the hall does their own clean up afterwards. But measures would include

cleaning stations around the hall, locking the cupboards so they cannot be

used and instructions that chairs must be cleaned after use.

the next couple of weeks.

RANKS SWELLING: The pandemic has not put teens off joining the village marine cadets unit.

The parish council heard from Lt Rachel Tooke that even though the members of 901 Troop were having to meet in the car park and practise social distancing, the ranks were swelling.

She said: “Even with Covid we have actually increased in members since we reopened three weeks ago.” There were 23 cadets on the books.

She said the unit was using portable sanitisation stations, parents and staff went through comprehensive Covid checklists and temperatures were taken by a qualified nurse.

NO SALE ON GARAGE SALE: The parish council won’t be staging the popular garage sale this year.

And because of the Covid pandemic it isn’t ready to commit to organising the event next year.

Deputy chairman Nigel Coe said some villagers had asked about the possibility of holding it in September and he knew other villages were running similar events. But he was unsure.

John Smithson said perhaps the council could stage it in a different format on the sports field rather than have people coming into the village. He believed parish council involvement was important and there had been lots of comment among local people about whether it was going to be held.

Marie Hartley said: “It’s not clear when we’re going to return to the village hall and if we’re looking at doing something like the garage sale we need to be mindful of that.”

The playing field was a potential solution, but she warned: “We are damned if we do and damned if we don’t. We will be criticised for going ahead with it or if someone else does it.”

She said reopening the village hall was a priority and staging the sale in September might be unrealistic.

A suggestion was made that the council park the sale until next year but members decided not to commit the authority to it.

BRIDLING AT PRICE: Closing part of the bridleway that runs alongside the allotments to install a water pipe is likely to cost around £3,000, councillors have been told.

John Smithson told Wednesday’s meeting the total cost of providing a supply for the allotment users was expected to be £4,000. But he though it was worth doing.

“It is a major infrastructure project that we have neglected to do for a lot of years,” he said.

Over the past four years users had suffered drought and often had to carry their own containers full of water to the site.  Many of them were elderly.

Cllr Smithson recognised it would make a dent in the council’s finances and suggested yearly 10 per cent rent increases to gradually bring it in line with Great Yarmouth, where rents were double. “I think it’s very important that we do it,” he said.

The council voted to support the project in principle and to investigate what it could to make it happen.

on them before the lockdown, which delayed their completion. During the summer

DAILY FISH: Winterton Fish Bar is now open every day including Sunday, but not

DRIVE IN: "Outdoor Cinema Live" will be screening several all time favourite films at 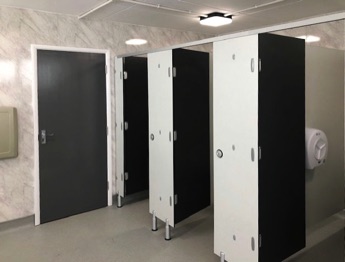 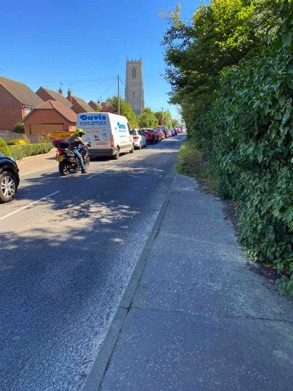