The Dutch village of

In January last year the sea was crashing against the pillars supporting the café on the Dutch side. When the winter storms subsided the authorities arranged for the sand to be replenished.

At the same time a similar battle was going on in Winterton to defend the café and car park from the waves.

Both resorts were popular with seals and both hosted important nesting tern colonies - Sandwich terns in the Netherlands, little terns in the UK.

Both had distinctive thatched cottages and both were close to wetlands where wind pumps had been used to keep the land above water.

“We felt surprise, recognition and almost a revelation,” said Yvonne. “It was a huge discovery for us.

For me personally, as a biologist, it was a relief to see how rich and beautiful the natural environment is over there.”

The visitors found the differences fascinating too. While Camperduin’s iconic thatched holiday houses were square, Winterton was famous for its thatched rondavels at the Hermanus holiday complex.

Second World War invasion defences on the Norfolk side of the sea were built to keep the Germans out, but in Holland they were built by the Germans to stop the Allies invading.

But perhaps one of the biggest differences was the attitude of government to coastline protection. The sea defence work and replenishment at Camperduin, known in English as Camperdown, is part of a long term projects.

IF you’ve ever stood on the beach at Winterton and wondered about the people living over the horizon on the far shore then you need wonder no more. 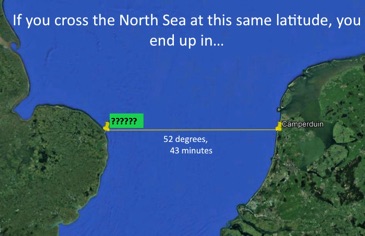 Because some of those people shared the same curiosity about their neighbours across the North Sea and came over to take a look.

They were stunned to discover it was their village’s twin.

The visitors from Camperduin, about 40 miles north of Amsterdam, decided to produce a slideshow detailing the similarities, including the beach and dunes, the wildlife, the cafés and the fact that both suffer coastal erosion.

The idea for Camperduin Sees The Far Shore was hatched when Yvonne Koning and Pjer de Goede, members of a group called the Driftwood Society, came over for a holiday and introduced themselves to Mick and Carmel Shiggins, who run the Dunes Café.

The Dutch couple had used Google Earth and found that Winterton was on exactly the same latitude as their village, which meant it was directly opposite. They were surprised to see it was also a small village holiday resort. It piqued their interest. Yvonne explained: “From our back garden we look out across the polder grasslands towards the sea dyke.

“Because there are no houses between us and the sea, we came up with the funny idea that, along that direction, our closest neighbours actually live on the English coast!”

She told the WoS website: “Our curiosity was reinforced when I was invited, as a citizen of Camperduin, to think along with local and national authorities about the coastal defences. Then I began to wonder how these problems were being tackled across the sea on the English coast.

“Moreover, we love England. We have spent several wonderful walking holidays in and around the UK and have fond memories of very friendly people and beautiful scenery.”

What they found was a beautiful sandy beach backed by dunes, just as at home. There were rock groynes, just as at home and what is more, the groynes had been installed by the same Dutch contractor, Van Oord, a dredging and land reclamation specialist.

Each village had a beach café on the dunes. In Camperduin it was café Luctor et Emergo. And both faced the threat of erosion. 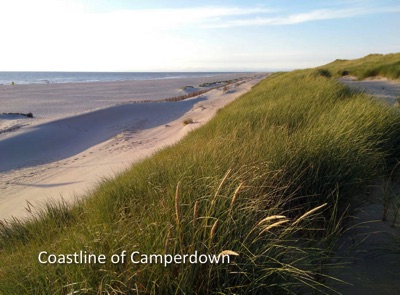 "Maintaining the coastline is regulated in the Netherlands by a governmental department. It is not the concern of the coastal communities,” said Yvonne. “The western part of the Netherlands is below sea level. The importance of good coastal defence therefore goes further than just that of the municipality.”

In Winterton the battle against erosion that threatens the dunes supporting the café and car park is having to be fought by the land owner, although next door Hemsby is getting some financial help with coastal defences.

When the show was screened at Camperduin’s village festival many were surprised by what Yvonne and Pjer had discovered.

She said: “Afterwards they told us that they were very pleasantly surprised about the many similarities between Winterton and Camperduin. And they thought it was a really good idea to investigate what lies beyond the horizon. Someone commented: the film makes us proud of what we have, and curious about the other side.”

Now people on both sides of the water are hoping to firm up the friendship and might even consider a form of twinning – a far cry from 222 years ago when the Royal Navy fought a sea battle against the Dutch at Camperduin.

Carmel said: “It was a lovely surprise when they came to the café and introduced themselves. They told us that they were directly across the sea from us and the similarities between our two communities were stunning.

“They bought us a box of biscuits from Holland which was a lovely gesture and they took our details and said they would be in touch.”

“We do hope to visit to get ideas of how to improve on what we as a business do, and to try and make some solid connections there,” she said. “Being almost a mirror image of ourselves I think we have more in common than we think and a great link to people of a similar ilk. I think as they have problems like us we could talk about that and maybe have tangible ideas to take to the ruling bodies that oversee our own protection.”

She thought a link could also be a great opportunity for Winterton children to have pen pals and maybe, with the new facilities at the primary school, take part in future student exchanges.

Camperduin Sees The Far Shore was shown by Winterton Cinema Society on Saturday, 29th June at the village hall. Thanks to Yvonne Koning, Geoff Roper and Norman Parcell for their help in making this happen.

Camperduin Sees The Far Shore was produced by Yvonne Koning and other members of the Driftwood Society in Camperdown.