Body recovered in search for missing swimmer at Winterton

WE'VE been blessed with some fantastic weather recently – perfect for greeting the sun on solstice morning. Members of Winterton on Sea Camera Club members Andrea Howard and Michelle Perrin were among those up before the larks and were rewarded with a stunning scene.

WINTERTON’S wildlife will be the subject of a five-hour ‘bioblitz’ aimed at recording as many of the different species as possible.

The event on July 30, will run between 10am and 3pm from the village hall.

“From moths to butterflies, dragonflies to birds, wildflowers to trees we will be recording it all.

Experts will be on hand to lead guided walks and help us with identifying species,” said Gemma Walker from Norfolk Wildlife Trust.

“Why not record the wildlife in your garden on Saturday July 30 and pop in and tell us what you have found, or take a walk round the village or on Winterton National Nature Reserve and share your wildlife sightings with us. Every record counts!"

Gardeners can also take advantage of a free workshop to help them encourage different kinds of wildlife into their gardens. Greening for Wildlife in Gardens is being held in the village on July 21 between 2pm and 5pm.

Take part in ‘bioblitz’ on village

WHEELCHAIR and mobility scooter users are finally able to access the village hall green after a footpath was installed in front of the hall.

The work was paid for by the parish and Norfolk County councils in a 50/50 partnership.

Disabled-friendly raised beds were added to the open space last year by the In Bloom team, but the rough ground and raised kerbs prevented some from getting onto it.

Group chairman Claire Thompson said: “I think it’s great that we have the path and people will be able to use the green. The beauty of it is if they want to they can deadhead the flowers in the containers, so they are doing something to help."

AN inspection has revealed major repairs costing in the region of £160k are needed to the roof and tower of the parish church within the next two years - and another £300k of work is needed within five.

The report by conservation architect Nicholas Warns praised efforts of the parochial church council in recent years to maintain the building, including repairs to the top of the tower.

But he said: “There are some very costly repairs needed now and in the near future. Flints are falling from the tower wall and breaking the tiles on the nave roof and the nave, chancel and porch roof tiles are all decaying.”

The PCC is seeking help from the public to raise the cash needed to replace the roof on the Grade I listed building and preserve it for the future.

Roy Burrows, who took over as church fabric officer this year, said immediate repairs listed in the report were in hand. “We’re very fortunate that we’ve got a combination of reserves and donations that will cover that.”

But it would empty the coffers as far as the work on the roof and tower was concerned. “The estimate for the roof is £160,000 and that’s a huge target to have to meet.”

He said the church would be applying for grants from organisations that had supported it before,

including the National Lottery and Historic England. But that would only raise part of the money and it would need contributions from the public.

A sponsor a tile campaign is in the pipeline. “All the tiles will be numbered and anyone who donates will be recorded on a roll of benefactors that will be kept in perpetuity,” said Roy.

And a push to host more community events could help to raise more cash. A concert by the Chorus of St Cecilia later this month is the first of what is hoped will be many similar occasions.

“We want to use the church a lot more for community activities,” he explained. “It is actually part of what the church is there for. The church as a physical building should really be at the heart of the community. We don’t want to spend that amount of money on a building just for people to look at it.”

The parochial church council is hoping people who have connections with the village, relatives buried in the churchyard or even visitors with happy memories of holidays here, will add their support.

The annual gift day, which has helped to boost reserves in the past and maintain the church is on August 27 this year.

In his report Mr Warns said ideally the roof should all be replaced now, but it was more likely a phased approach would be needed, with the east side of the tower, nave roof and buttresses first on the list.

He estimated stripping and relaying the nave roof with new gullies and drains, and repairing the tower east wall as well as restoring the Charles I royal arms would be in the region of £160,000.

Further down the line he said the PCC would have to find another £250,000 to repair the rest of the tower walls, £40,000 to strip and replace the chancel roof and parapet and £20,000 if more new drains are installed.

The architect, who described the church as spectacular and furnished delightfully in the High Anglican style, advised: “The PCC will have to develop a programme of events and uses which attract a variety of people to the church, in addition to church services, in order to justify the expense of the major repairs to grant awarding authorities.

"This increased use will also justify the installation of a new kitchen and WCs, which could fit into the base of the tower.”

Anyone who wants to support the appeal online can donate through justgiving.com/pccwinterton, which has been set up recently.

Roy said: "Of course we are still happy to receive cheques or cash donations, either at the church or via the churchwardens.

The body of a woman in her 60s was recovered from the sea at Winterton after a two-hour search by lifeboat crews and the Coastguard.

They were alerted just after 3.30pm on Sunday because of concern for her safety after she disappeared from view from the shore when she went swimming.

Norfolk Police said: “Officers joined colleagues from Norfolk Coastguard in a land and sea search operation but sadly, the body of a woman, who was aged in her 60s, was recovered by the coastguard shortly after 5.35pm.

“Despite attempts to resuscitate her, the woman was pronounced dead at the scene.”

Her death is being treated as unexplained and inquiries are being made to establish the circumstances surrounding her death. 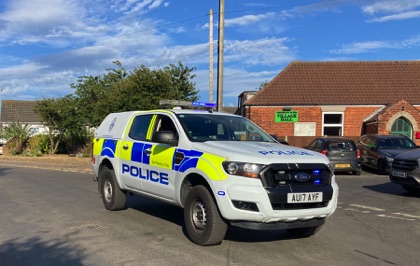