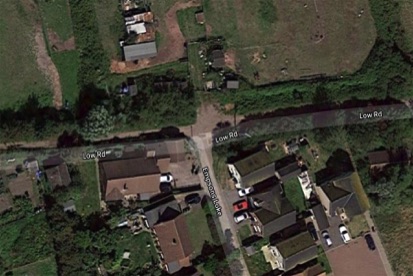 LOW ROAD RESURFACING: There is no evidence to support claims being made in the village that Low Road is to be widened when improvement work starts later this month.

The byway is going to be resurfaced using unsealed granite, which is commonly used on paths and byways and the contractor is being instructed the work should only be done within the byway itself.

A Norfolk County Council ecologist has advised there may be nesting birds at the moment and the hedgerow should be left.

And the county council’s cycling and walking project officer Andrew Middleton has said: “There is adequate clearance along the route corridor for the construction works to be carried out safely and so no further vegetation clearance will be required for the surfacing works.”

The route is due to close to traffic between 19th April and 14th May for the work to be carried out.

Are you feeding the gull problem? That’s the question to householders as part of the awareness campaign relaunched by Great Yarmouth Borough Council to reduce nuisance from gulls in residential areas.

The social media campaign highlights the direct link between the act of feeding gulls and the nuisance colonies cause in suburban areas, asking “Are you feeding the gull problem?” and advising householders “Don’t be #gull-ible”.

Through raising awareness, the eye-catching campaign aims to help reduce gull-related issues that affect people’s home lives, such as noise nuisance keeping people awake in the early hours, messing of cars and laundry, and aggressive behaviour from gulls protecting nests and fledged chicks.

A leaflet with the same clear message will also be given to Environmental Services officers to distribute in a targeted way in residential areas when complaints about gulls are received.

feeding the seagulls and attracting them to the locality. The remainder of the complaints were associated with seagulls nesting and being aggressive in nature, during the nesting season.

Despite the market place having historically been an area where complaints have been received as the seagulls are very high profile, during the season of 2019 the report shows the council only received two complaints about seagulls in this area.

Though there has been a large increase in complaints to the council, the emphasis changed from complaints about attacks to complaints about people’s behaviour and feeding the birds. For example, only six out of the 37 gull related complaints received in the last six months of 2020 were regarding gull attacks.

Cllr Penny Carpenter, chairman of the environment committee, said: “Gulls are intelligent, social birds who choose to nest together with close access to food. If there is less food about, gulls lay fewer eggs or go where there are richer pickings.

“This campaign has proven that there was, and still is, an issue of gulls spreading into some suburban areas due to people disposing of waste irresponsibly and unfortunately feeding gulls.

“Due to the reports we’ve received in response to this complaint, we have been able to visit households to provide advice and asking those people guilty of over-feeding to pause and consider whether they are, quite literally, feeding the gull problem.

“Often, the householder does not realise that the feeding of gulls cause upset in the wider neighbourhood. Therefore, it’s important that we continue to educate residents so we can work together to stop the gull problem.” 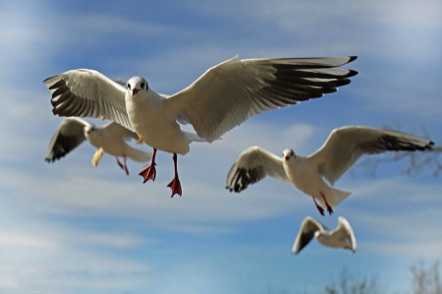 A LITTLE RESPECT: A suggestion that dogs should be banned from part of the beach in the summer prompted anger in the village.

Resident Paul Sheales said he was very strongly against the idea when the parish council met virtually on April 26.

“We slowly seem to be losing our rights as villagers over certain sections of the dunes,” he told councillors. “Wildlife is going to expand to where we as villagers have got no beach.”

He said the number of visitors, many attracted by social media, was causing issues including parking and rubbish left behind, and the impact was being felt by residents.

The request from another resident for restrictions similar to those at Sea Palling to be considered for the beach north of the car park was raised at the council’s March meeting.

Chairman Mark Bobby told Mr Sheales: “Our stance is that it has got to be something that’s reviewed and considered. It must be appropriate for the village. I can categorically say that it has never been on the agenda.”

He didn’t know if it was within the council’s power or not, but if anything was considered the village would be consulted.

As far as social media was concerned, the village’s secret was out and he felt the worst culprits when it came to traffic and mess were day trippers rather than holidaymakers who stayed locally. It was about educating people who came to Winterton, because with the advent of staycations the problem was not going to go away quickly.

Cllr Nigel Coe said the traffic was very much an ongoing issue for all. The council put out cones to ease the problem and would be looking to expand what it could do from a traffic management perspective.

He said a lot of the problem came from a lack of respect by visitors, whether it was letting their dogs poo, dropping rubbish or blocking gates.

LOW ROAD RUMBLES ON: Controversial resurfacing work in Low Road has been defended.

The Norfolk County Council project came in for heavy criticism from some in the village who claimed it didn’t need to be done and would affect wildlife. Others complained part of the route was a now patchwork of crushed rocks.

But the scheme has been welcomed by those who say it was almost inaccessible in wet weather for people using buggies and wheelchairs. And the council has said it will be back to finish the work properly.

The byway is next to the area of outstanding natural beauty that stretches between Winterton and Waxham. Becky Durant told the parish council on Wednesday: “It is difficult to understand how this newly resurfaced road is conserving or enhancing the area.”

She said she was concerned because the officer in charge of the scheme intended to return to implement biodiversity improvements and she had no confidence he knew what he was doing.

An ecology report in February suggested that hedgerows should be planted in the area – but the plants listed were all species that were removed in the run up to the resurfacing work being done.

She asked if residents could work with the officer to ensure he achieved what was intended, which was surely to improve Winterton.

Chairman Mark Bobby said parts of the road had been impassable for people with wheelchairs and pushchairs and that was why it had been done. “Yes it is a special area, but it needs to be open and passable to everyone in the community.”

He explained the parish council had been consulted beforehand. “As far as we as a parish council were concerned it was in the hands of experts who knew what they were doing.”

He stressed the work was not yet finished, but the officer in charge of the project had been back to address concerns. “The work is not complete. He has acknowledged some of it is not to his liking.”

And he said the stretch from Empsons Loke to the playing field would be re-rolled.

HOPES FOR SALE: A garage sale could be staged in Winterton later this summer.

Cllr Nigel Coe said a number of villagers had approached him to ask what the chances were of being able to hold a sale this year.

“Hemsby is having garage sales,” he said. “We don’t want to keep pushing it back and back. It needs to be when people are about.”

The village would have to dig deep with the parking, said Cllr Dawn Clegg, because at one point during a past sale buses had to be suspended because they couldn’t get through.

Cllr Marina Coe suggested it should be discussed and a proposal brought back to the next council meeting. 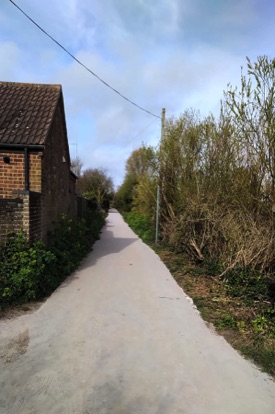 “For us as a parish council our priority is to enhance and protect our community for the benefit of all, said Cllr Marie Hartley. “When you look at what we have got now compared to what we had two or three months ago, you cannot ignore that it is an improvement.” 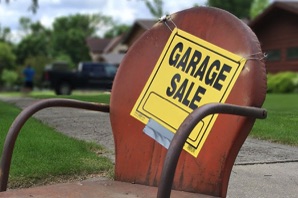 FOOTPATH FIGHT GOES UP A GEAR: A battle to reopen a footpath between Winterton and Hemsby has gone to appeal.

Norfolk County Council turned down an application by campaigners to designate the link a public right of way after it was blocked over five years ago.

Becky Durant, one of the people behind the application said they had heard from the Planning Inspectorate that their appeal against the decision was being considered.

She explained the county council would be asked to explain why it refused the bid.

People living along the route would be asked to comment on it as part of the process which is expected to take around six months.

The path was blocked suddenly in April 2015 on a short stretch where it crossed private land between the Winterton Valley and Long Beach estates. It left walkers having to chose between the busy Hemsby Road or the dunes.

Although not an official footpath it had been used by villagers for decades.

See our previous blog for more.

FIRE DANGER: Vandals have attacked a rack full of beaters used to tackle fires on the dunes.

Cllr Norman Parcell said the racks were broken down and the beaters hurled into the bushes.

“We had a very dry April. This is a matter of some urgency,” told the parish council. “They are firefighting equipment and they’re there for us to use until the fire brigade arrives.”

The nearest station at Martham was not manned full-time and would take 10 to 12 minutes to arrive.

He pointed out several houses backed onto the dunes. “By the time they’ve got there, with the winds that come off the North Sea, we could have a very bad situation.

He told the council he had restored the posts and retrieved the beaters.

COASTAL CODE: Tourism businesses are being asked to encourage their customers to enjoy, respect and protect the area.

The Coastal Code has been introduced giving visitors guidance not only on how to make the most of the county’s seaside beauty spots, but to stay safe, respect its communities and ensure they don’t harm its wildlife.

It includes information on breeding seasons for birds and seals, guidance for dog walkers and advice to keep to paths, stay away from cordoned off areas and take littler home.

Visit norfolkcoastaonb.org.uk for more information or to get copies of the code. 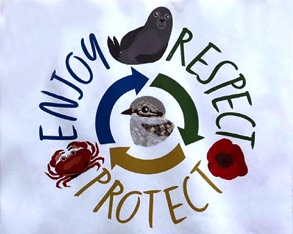 UMBRELLAS BID: A planning application has been lodged with the borough council to install two 5m square green umbrellas on the patio area at the back of the store to protect tearoom customers from rain and sun. The parish council has raised no objections.

COTTAGE APPLICATION: Plans to demolish a former workshop replace it with a cottage have been submitted for Mill Farm on Hemsby Road. The building was once used by CH Martin Engineering. According to the application its replacement will have appearance of a grain barn. Parish councillors have not objected.

BOWLED OVER: The village hall will feature on an advertising board alongside the green at the bowls club. Parish councillors agreed to pay £50 to support the club with a hoarding that it is hoped will attract bookings for the hall.

BLOOMING BEAUTIFUL: Ideas from Winterton In Bloom to brighten up the village green have won the backing of the parish council.

Among the projects are changes to the planting at Winmer Avenue and a toffee apple tree – named because its leave smell of burnt sugar when crushed. The village sign will also be re-varnished.

The group is also working on a plan to make the green accessible for disabled people.