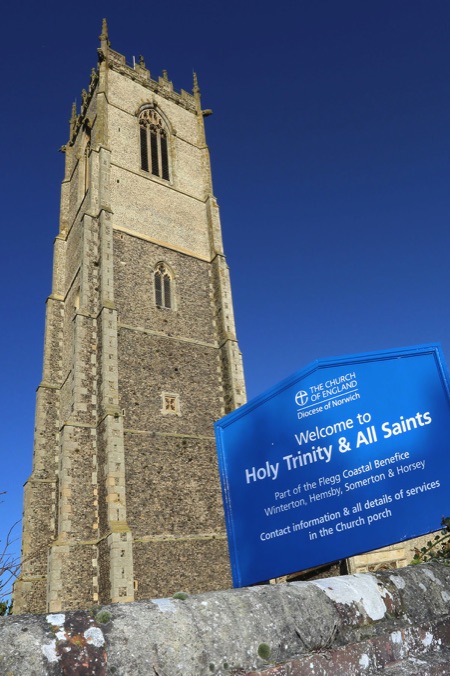 There is a flower festival that is well supported and people will also turn out for events like the Good Friday Walk of Prayer through the village.

It is one of the four rural parishes Fr John is responsible for in the Flegg coastal group and like much of the rest of Winterton, it is dog friendly – in fact he has his own canine assistant Dixie, a rescue dog. Well-behaved pets are welcome at services.

The son of a shepherd, Fr John, who arrived in the village in February 2019 after two decades in charge at St Edmund in Hunstanton, is an experienced church organist as well as a priest. As a schoolboy in North Norfolk he played for both the Church of England and Methodist churches in his home village of Holkham.

Parish Mass is at 9am on a Sunday and the church is open daily between 9am and 6pm - or until dusk in winter.

Rev Clarence Porter's grave, which is in line with the altar 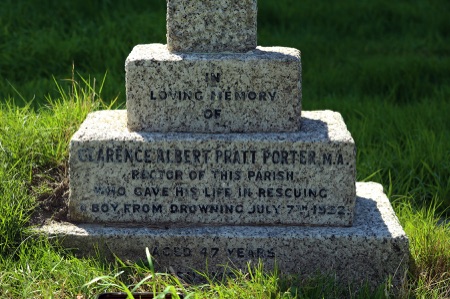 THE fishing heritage of Winterton is apparent as soon as you walk through the door of Holy Trinity and All Saints Church.

Nets from one of the last fishing boats that made a living from the beach hang from the walls and at the back of the church is Fisherman's Corner with a crucifix carved from ships' timbers.

The feature was the idea of one of current vicar Rev John Bloomfield’s predecessors, Rev Clarence Porter, who was rector between 1925 and 1932. 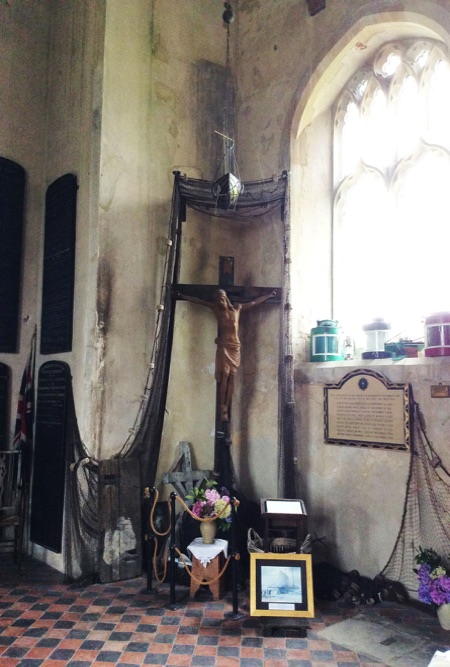 Rev Porter's life was cut short when he suffered a heart attack after rescuing a choirboy from the sea and among the tributes to local lifeboatmen, who carried out daring rescues, is a memorial to him. He is buried in the churchyard and flowers are still occasionally laid on his grave.

Joseph Hume of nearby Burnley Hall, a 19th Century MP who campaigned against anti-trade union laws and protested against flogging being used as a punishment in the army, is also remembered on the walls of the church along with another Hume whose generous legacy can be seen in the beautifully carved roof and rood screen.

One of the 14th and 15th Century church's big claims to fame is the impressive tower. At over 132 feet high it dominates the landscape and served as a lookout post during times of war. Some of the soldiers who spent cold and lonely nights up there left their marks etched into the lead roof.

It underwent a major restoration in 2014 and now, on Saturdays during the spring and summer, it is open to the public and offers stunning views over the surrounding countryside as well as out to sea. On a clear day those who make the climb can see as far as Happisburgh lighthouse to the north and Caister water tower in the south. (Please see our slideshow).

Times and the local population may have changed over the years, but the church is still an important part of the village.

Inside Holy Trinity and All Saints Church

An aerial trip around the church

Rev Clarence Porter's grave, which is in line with the altar

The Eucharist  from Hemsby Church.

Thank you Fr Patrick Kerley, who presided in Fr John's absence. The hymn was recorded 25 years ago at a parish patronal festival when Fr John was Vicar of St James' Littlehampton, now sadly closed for worship.